The impact of globalization on organizations is increasing rapidly, no matter the size or industry. In today’s open economy, organizations are more exposed to bribery. Bribe means a payment or any other favor that is given to others to influence them to act in favor of the bribe givers. Different forms that bribery may take besides money are:

• Hiring unqualified relatives, in order to promise or influence them to permit an illegitimate contract;
• Giving gifts and paying for vacations of a public official; and
• Paying a public official not to do their job.

Nowadays, bribery has become one of the main concerns for the public and private sector, with countries, governments, and organizations making it a top priority to fight against. Nevertheless, many laws, conventions, and policies have been designed and implemented to prevent corruption and bribery around the world. However, they are still one of the most concerning issues worldwide and many organizations intend to implement an anti-bribery management system that effectively addresses bribery and eliminates it as a threat or risk to their organization.

Effect of Corruption and Bribery in Organizations

The impact and the effects of bribery are different, but you can find it everywhere in the world. The existence of bribery is one of the worst enemies of organizations because it significantly reduces its credibility and profitability. After all, corruption and bribery involve misuse of funds, misuse of their position or authorization and dishonesty in financial matters, which will result in reputational damage for the organization. But what is strange is that a research done by Harvard Business School found that firms that launch anti-corruption efforts grow their businesses more slowly than firms that do not. Well, the reasoning behind this could be pondered or answered from the following research.

The findings from Transparency International in Europe and Central Asia show that:

• 1 in 3 citizens thinks corruption is one of the main problems facing their country;
• 1 in 3 say that government officials and lawmakers are mostly corrupted;
• 1 in 6 households have paid bribe in the last year;
• 3 in 5 think that wealthy individuals have too much undue influence over government decisions;
• 1 in 5 bribe payers report the incident; and
• 2 in 5 who do report corruption suffer retaliation. 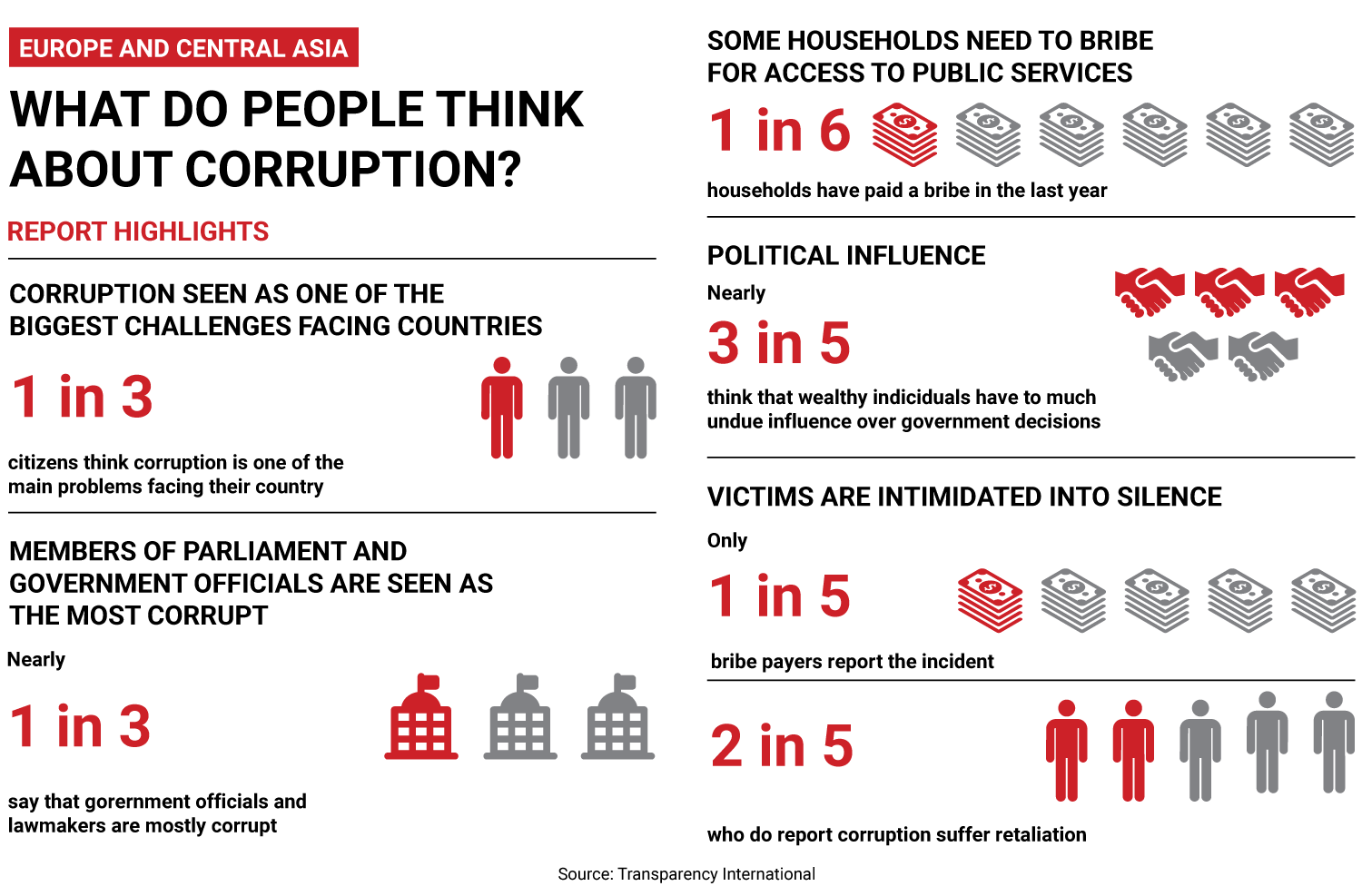 Other surveys show that the cost of corruption equals more than 5% of global GDP (US$ 2.6 trillion, World Economic Forum) with over US$ 1 trillion paid in bribe each year (World Bank).

The main negative effects that follow organizations which are included in bribery are:
• Losses;
• Discouragement of Investors;
• Business Inefficiency;
• Distorts Development Priorities; and
• Damaged Business Image.

Countries and international bodies have drawn up regulatory frameworks to help fight corruption and bribery. International frameworks that had a significant impact and were ratified by the vast majority of states are:

• OECD Convention on Combating Bribery of Foreign Public Officials (1997) – all countries committed themselves to ensure the ratification of the Convention and pass necessary legislation for implementation into national law.

• UN Convention against Corruption (2003) – introduces a comprehensive framework that all countries can apply in order to strengthen their legislations to fight corruption and bribery. It makes a large impact by requiring the Member States to return assets obtained through corruption and/or bribery to the country from which they were taken.

Since OECD and UN have no enforcement powers, the effectiveness of the Conventions will depend on the establishment of adequate national monitoring mechanisms.

Is ISO 37001 a Long-Term Solution for Organizations Against Bribery?

• Anti-bribery rules and procedures – receipts being demanded for all the payments made and no cash payments;
• Risk assessment;
• Communication;
• Whistleblower Hotline – 24/7 services supported by a Protected Disclosure Policy; and
• Top level commitment.

An anti-bribery management system is designed to implement appropriate controls and to put in place an anti-bribery culture in an organization, with the result in increasing the chance of detecting bribery and preventing it.

The International Organization for Standardization published an anti-bribery management system standard (ISO 37001) in October 2016 to help organizations fight bribery and promote an ethical business culture. ISO 37001 sets the relevant requirements, including but not limited to: anti-bribery policy; management leadership, commitment, and responsibility; training; due diligence; reporting, monitoring and investigating; implementation of financial and commercial controls; and is designed to be used by any organization, large or small, whether it is in public or private sector.

Anti-Bribery Management System standard provides a global framework in order to reduce the risk of bribery occurring and it ensures that the anti-bribery management system of an organization is in compliance with the best practices internationally recognized.

Benefits of Implementing ISO 37001 in your Organization

Some of the benefits that your organization will gain when implementing ISO 37001 Anti-Bribery Management System are as follows:

• Position your business to deal with incidents of bribery more effectively;
• Ensures that all the employees are notified with anti-bribery policies;
• Operate an effective anti-bribery prevention framework;
• Best international anti-bribery practices;
• Being able to demonstrate that you are certified with ISO 37001 could be a powerful and differentiating factor for a company comparing with other competitors; and
• Ensures a revenue growth and is a cost saving framework.

Considering the damages that bribery can cause to organizations, PECB has established training curriculums and certification schemes for individuals who want to gain a comprehensive understanding of an anti-bribery management system and its principles, and for organizations providing them with clear and uniform anti-bribery measures when establishing and implementing an anti-bribery framework.

The Value of Knowledge Acquisition through Training