The Evolution of Management System Standards Leading to ISO 45001

In my HSEQ-MS auditing book, I summarise the evolution and chronology of management systems thinking. This starts with Sun Tzu’s Art of War probably written around 488BCE – a masterpiece of strategy advice showing generals how to win their battles – through the Deming Wheel (PDCA) for continual improvement from the 1950s to present. Aside from any company systems then in existence, OH&S management systems emerged from the UK H&S regulator in 1991 as ‘Successful Health and Safety Management’, commonly known as HSG65 and memorable for its pneumonic POPIMAR.

Modern business management systems standards (MSS) can be traced to 1959 and the publication of US Defence standard MIL-Q-9858. Put simply, this standard was developed to ensure that manufacturing processes were reliable enough to deliver munitions that would explode consistently when they hit their targets – to control variation, and conserve the resources wasted when they did not function as intended. Understanding this purpose is central to understanding the function of an OH&SMS. It must bring structured control reliable enough to eliminate or reduce injuries to workers and others.

In 2015, ISO 9001 was revised to reflect the then-new ISO structure in Annex SL as shown in Figure 1. For the first time, Annex SL provided a common high-level structure (HLS) for all MSS owned by ISO. Revision of ISO 14001 followed similarly later that year, and the forthcoming ISO 45001 will also be developed using this same HLS. From over 30 years of practice, I knew that the benefits to businesses of using MSS were potentially very great indeed. Concurring, British Accreditation Bureau reported that 67% of their certified clients had won new business, and others such as Heras and Corbett showed that certified organizations achieved superior return on assets. 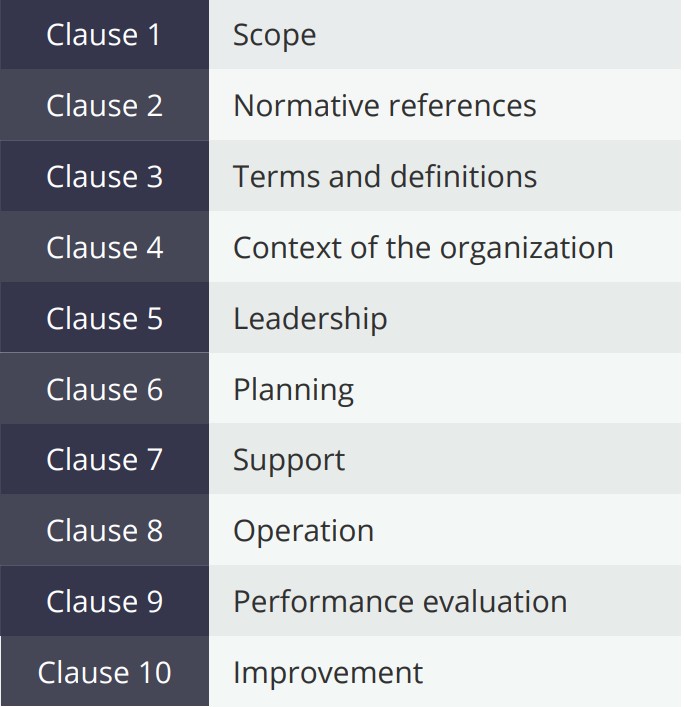 In the early 1980s, the UK regulator HSE resisted the development of an OH&S management standard. At this time, HSE’s course was firmly set. Based on the meeting held with Bamber, L. (2016), he reports that the HSE Accident Prevention Advisory Unit (APAU) was supportive of such a standard so long as it was not certifiable, but that the HSE Chief Executive blocked it shortly afterward. Nobody wished to progress without the support of the regulator, despite seeing the possible commercial opportunities. By this resistance, I believe HSE hindered the opportunity for otherwise-proactive organizations to progress the self-regulation agenda.

Around the world, national standards-setting bodies produced a variety of OH&S-MS, but few caused a ripple.

OHSAS 18001 was developed by the Occupational Health and Safety Assessment Series (OHSAS) Project Group in 1999 and revised in 2007. Its owner certification bodies said that the standard would be withdrawn upon the publication of a comparable ISO standard (and this is expected in 2018).

In 2001, the International Safety and Health Information Centre (IOSHIC) reviewed all the available OH&S-MS and made recommendations to the International Labour Organization (ILO) for an international standard. ILO launched its own non-certifiable OH&S management system standard, ILO OSH-2001. 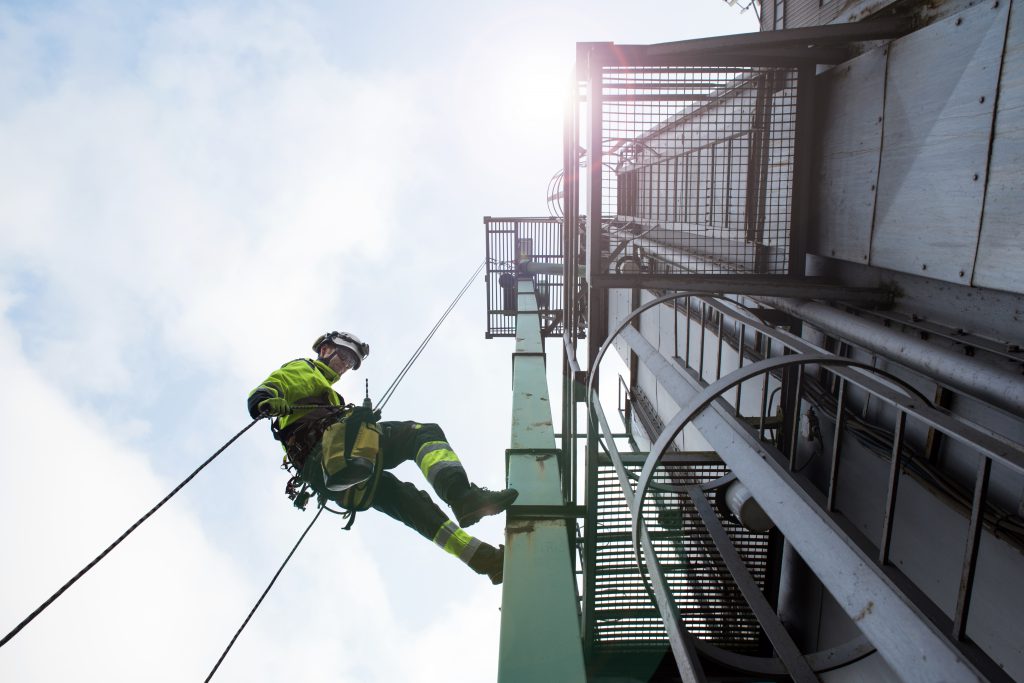 The development of ISO 45001 commenced in 2013 and was written by the ISO technical committee. There have been three drafts (committee, DIS1 and DIS/ISO 45001.2), where the second one failed to secure sufficient support.

The DIS/ISO draft achieved a majority of votes (88% of national standards bodies supported it), and a final draft (FDIS) was published in November 2017. Publication of the world’s first ISO MSS for OH&S will occur, probably in February 2018, if the ballot on the FDIS due on 25th January 2018 is successful.

For users of ISO 45001, Figure 1 summarises what this will mean. Clauses 1-3 can be ignored for practical purposes, as the scope is self-evident, there are no normative references in the standard, and it is likely that a competent OH&S adviser will be to hand to explain the terms used in the standard; generally speaking, these definitions come from common health and safety language.

All Safe Group has employed international standards to focus its leadership, and build its hazard identification and risk control prioritization. The company uses its own evolution of an OH&S MSS which we assisted to develop; it follows the PDCA cycle very closely, and the client will likely adopt ISO 45001 once published. The key to its success has been using risk assessment to prioritize its objectives and targets. It does not allow trivia to interfere with or divert resources from, its major improvement programs. Everyone is involved.

There are many ways to assess the success of such a program. Our client likes to appraise its success on measures of cultural development, worker engagement, and risk reductions. But these are difficult to express succinctly in a short article such as this. Measures of fatality and injury reduction – FAR, LWDC and TRIR – are simpler to share, and easier to understand. Figures 2, 3 and 4 present this data for the last ten years. As it can be seen, the fatal accident rate has reduced from 7 to 3 per 100 million hours (i.e. 50,000 full-time equivalent employees and contractors working for twelve months), lost workday cases have fallen by threequarters, and total recordable accidents by a third, while we concurrently press for improved incident reporting. While sadly, the business still hurts its employees and contractors, we note the marked performance improvement. Together, we’re working towards further improvements. 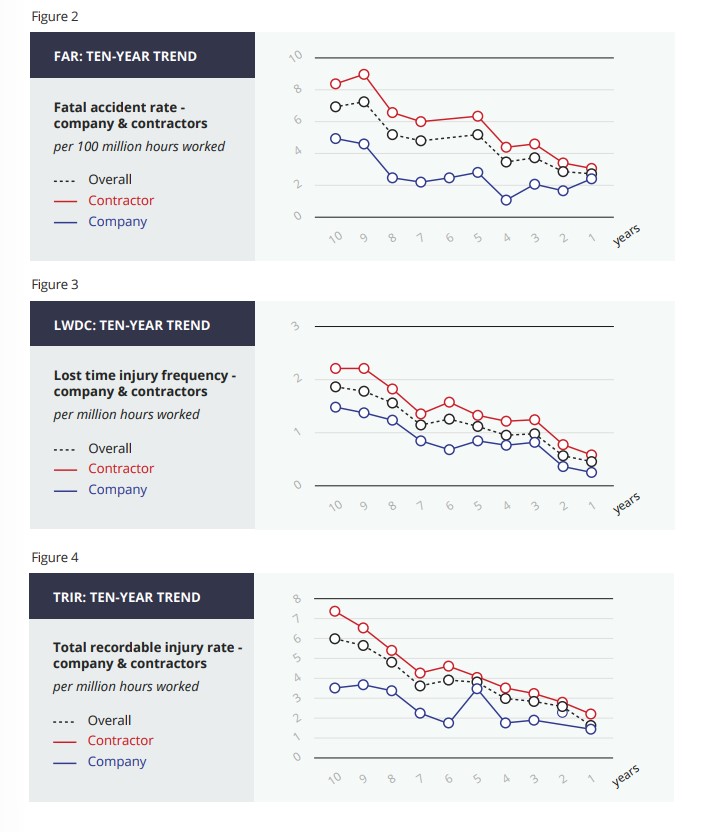 Several measures and strategies are being developed to prevent, lessen or eliminate occupational hazards and risks. Occupational Health and Safety Management represent the organization’s efforts in anticipating, recognizing, evaluating and controlling hazards arising in the workplace that could impair the health of workers.

The accumulating evidence shows that benefits of implementing the Occupational Health and Safety Management go beyond simply recognizing and preventing accidents.

Stephen Asbury is the author of six books on safety and risk management for Routledge Taylor & Francis, and the founder and CEO of AllSafe Group Limited. He is a Chartered Fellow of the Institution of Occupational Safety and Health (CFIOSH), a Chartered Environmentalist (CEnv) and a Professional Member Emeritus of the American Society of Safety Professionals (ASSP). In development to his career, Stephen is writing the autobiography of ex-F1 racing driver Martin Donnelly.

Out of the Box

Certifying to an Energy Management System

Preparing for a Pandemic

Together We Save More

The Solution to Pharmaceutical Industry Anomalies